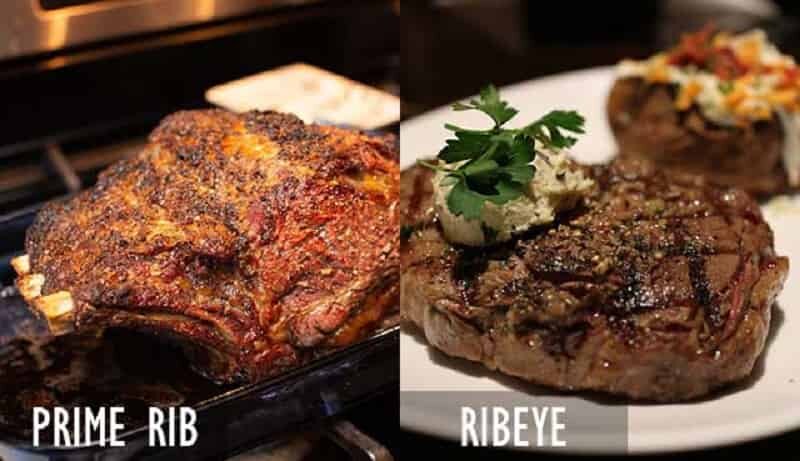 Especially for the uninitiated, the different cuts of meat can be confusing. Whether you are ordering a meal at a high-end restaurant or you are shopping for meat at a butcher in the neighborhood, you will be overwhelmed with the terms that you will encounter. Two of the words that you will often see and hear are prime rib and ribeye. They sound almost the same, but there are some differences between the two.

Curious about the difference between prime rib and ribeye? We got you covered in the rest of this short article. Keep on reading and we’ll help you be more knowledgeable about your meats.

Both are from the Primal Rib

One of the most important things to note about these two cuts of meat is that they both come from the primal rib area of the cattle. The good thing about the rib is that it is an inactive or under-worked portion. Because of this, there are no pronounced muscles, which will make the meat tender. Those that are derived from the active parts of the cattle are often harder to chew.

They Have Different Cuts and Size

It is easy to notice the difference between the two when it comes to their cut and size, making it easier to tell which is which by just a glance. Prime rib steaks are larger compared to a traditional ribeye cut. It is also common for a prime rib to be sold as a huge chunk with four ribs, which is why it is traditionally larger.

Texture of the Meat Varies

While they are both primal rib cuts, there is a difference in terms of their texture. The method of cooking will largely influence the texture of the meat. However, when they are raw, some key differences are worth noting. In the case of a prime rib, it is basically a large section that includes a ribeye. It has muscles and fats around the meat. It is also bone-in. It is softer and moister compared to ribeye. While the ribeye is also from the rib, it is from a less prime portion of the cattle. This makes it harder compared to the prime rib. However, it is still softer compared to meats from the over-worked parts.

There is More Than What Meets the Eye

For most of us, the more important consideration is how the meat tastes like and not how it looks. With this, let us also explore the difference between prime rib and ribeye in terms of their flavor. Because of their location, the two have pronounced beefy flavor that is sure to be tasty even when you keep the seasonings and sauces at a minimum.

Rich, tender, juicy, and intense – these are some of the words that can perfectly sum up the flavor of prime rib. Especially if it is cooked with the bone, the flavor is more intense and it has a better ability to retain moisture. The meat tends to unleash its best flavor when you cook it medium-rare.

On the other hand, with ribeye, it has a rich and buttery flavor. One of the reasons for this is the fat marbling. The fat melts to give the meat more flavor. This also makes it tender and juicy.

The two are also different in terms of the best cooking methods. This is subject to debate since it all boils down to personal preferences.

For the prime rib, one of the best ways of cooking it is through roasting. Roast the meat at a low temperature and wait until the internal temperature reaches 130 to 140 degrees Fahrenheit. Slow baking in an oven is also a common method of cooking. Pay attention to the duration at which it is cooked since the meat can easily become dry, and hence, it will end up being tough. For additional flavor, garlic and herbs will work best to complement the natural taste of the meat.

Meanwhile, the most popular way to cook ribeye is through pan searing or grilling. They are ideal for cooking in high heat. They are also thinner compared to prime rib, so it cooks quicker regardless of the method that you choose. The fat of the meat contributes to its full flavor. With this, you are good even if you use only salt as a seasoning when cooking this cut of meat.

Many people who enjoy steak don’t mind how much they spend as long as they are enjoying the best flavor. For many of us, however, price plays a major role when it comes to what meat is best to buy or order at a restaurant. Prime rib is usually larger, which is also why it is often more expensive. It is also more flavorful, so it is no longer surprising that its price per pound is usually higher.

Now that you reached the end of this post, we hope that you are already enlightened on the difference between prime rib and ribeye. While they are both from the primal rib of the cattle, which is an under-worked part of the body, they are different in many ways, such as the size, texture, flavor, cooking methods, and cost. It is impossible, however, to say which one is the better option. Only you can answer that question! So, try these cuts of meat today and see which one appeals more to your taste and preference.

Best CPAP Pillow for Side Sleepers to Get a Restful Night